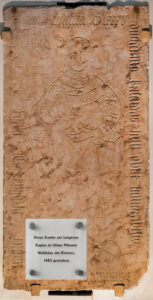 The red marble epitaph resides in the Klosterkirche Oberelchingen, near Ulm.

Petrus Kastler was a Roman-Catholic Priest from Langenau, Germany.  Langenau is only a few kilometers from Asselfingen, where Christian Kastler, the top-level ancestor of the Swabian Kastlers, was born and lived in the 1400’s. Because of this, the presumption is being made that they were closely related.

Petrus was presented as Minister of Thalfingen on July 15, 1455. Thalfingen is a small town a few kilometers north-east of Ulm. Around the year 1480, Petrus bequeathed goods for the benefit of the Elchingen Abbots, in order to allow a Benefice in Stoffenried, as the basis for a separate parish. When Stoffenried was raised to parish around 1494, a late-Gothic new church building was erected, where today the tower still stands. The monastery Elchingen then provided Stoffenried with priests. The patron saint of the church was Saint Egidius.

Petrus died in 1485. An epitaph of red marble dedicated to Petrus resides in the Klosterkirche Oberelchingen, just outside of Ulm. This is most likely the oldest known image of a Swabian Kastler.

The following records were found on the website of the Katholische Universität Eichstätt-Ingolstadt.

Abbot Friederich from Elchingen and the convent are presenting Peter Kastler from Langenau as Minister of Thalfingen to the Bishop Petrus (Peter) from Augsburg and his (curate)-assistant Friedrich, after the renunciation of Johannes Schlickenberg.

Leonard Gessel, licensed curate of Augsburg, accepts Peter Kastler from Langenau as Minister of Thalfingen, due to the renunciation of Johannes Schlickenberg.

P. Innozenz VIII (the thirteenth) is separating the church of Stoffenried from the church of Waldsteten with the approval from Abbot Paulus from Elchigen. Stoffenried was a branch of Waldsteten and will now be its own independent parish church since Minister Petrus Kastler founded a benefice for this church. Petrus Kastler is now allowed to use the income from this church for his church alone.

Joerig Lieber, the oldest citizen of Ulm, leaves Abbots Paulsen from Aichinen, Curat of Wyblingen , and Heinrich Negelin, Minister of Fahlheim who are chosen to carry out the “Last Will” of Petrus Kastler from Langenau, chaplain from Ulm, his “half big and small tenth” (translated literally, the “small tenth” is tithing, but not sure exactly what the “half big” means) from Walpertshofen at the Bybrach for a new parish church in Stoffenried.

footnote: Hainrich Rembolt and Wilhalm Oet, both judges of Ulm seem to approve the transaction
there is also a mention of a copy going to bishop Friedrich of Augsburg.

The Abbots Conrad of Wilblingen and Paulus of Elchingen, as well as Minister Heinrich Negelin of Fahlheim report as executioners of Petrus Kastler’s, chaplain of Ulm, “Last Will” , the foundation and furnishing/decoration of a new parish church in Stoffenried, former branch of Waldsteten.

Bishop Friedrich of Augsburg leaves instructions over the new, from Petrus Kastler’s (chaplain of Ulm) founded parish church of Stoffenried, former branch of Waldsteten, due to the reports from the Abbots Conrad of Wilblingen and Paulus of Elchingen, as well as Minister Heinrich Negelin of Fahlheim: These Abbots will be awarded the presentation rights for the church. 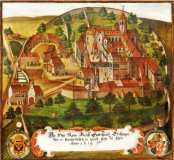