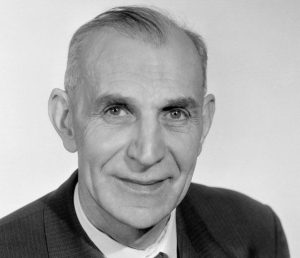 Alfred Kastler was born in Guebwiller in Alsace on May 3, 1902. He followed his early studies at the school in his native town, and continued at the Oberrealschule of Colmar, which became the Lycee Bartholdi in 1918, when Alsace was returned to France.

In December 1924 Kastler married Elise Cosset, a former pupil of the École Normale Supérieure. By working as a history teacher in secondary schools she made it possible for her husband to devote to research all the leisure time left to him by his own teaching duties. They have three children: Daniel, born in 1926, Mireille born in 1928, and Claude-Yves born in 1936. They have all married, there are now six grandchildren, whose ages range from 14 years to 10 months. Daniel is a Professor of Physics at the Faculty of Science in Marseilles, he is working on theoretical physics problems; Mireille is an ophthalmologist in Paris, and Claude-Yves teaches Russian at the Arts Faculty in Grenoble.

He entered the École Normale Superieure in 1921, and left in 1926 to teach in a lycée. He taught for 5 years, first in the Mulhouse lycée, then in those of Colmar and Bordeaux. The next stage of his career was in higher education: assistant at the Bordeaux Faculty of Science from 1931 to 1936, lecturer at Clermont-Ferrand from 1936 to 1938, professor at Bordeaux from 1938 to 1941. In 1941, in the midst of the German occupation, Georges Bruhat asked him to come to Paris to help him in establishing physics teaching at the Ecole Normale Superieure. The post was provisional, but was confirmed by the allocation of a chair in a personal capacity at the Paris Faculty of Sciences in 1952. 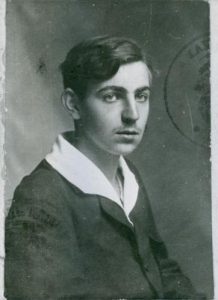 Alfred Kastler as a teen

His mathematics teachers at the Colmar Lycée, Fröhlich from Bavaria and Edouard Greiner from Alsace, were the first to awaken his interest in science. This predilection became consolidated in the special mathematics class held by Mahuet and Brunold, who helped Kastler to gain entry to the École Normale Superieure by the side entrance, so to speak. In the stimulating and friendly atmosphere of this college, the teacher Eugène Bloch (who came from the upper Rhine and who subsequently disappeared without trace in Auschwitz) initiated his students into the concepts of Bohr’s atom and quantum physics, and drew Kastler’s attention to Sommerfeld’s book on atomic structure and spectral lines. This book introduced him to the principle of the conservation of momentum applied by A. Rubinowicz to the exchange of energy between atoms and radiation. This principle was to guide the whole of Kastler’s research, beginning with his thesis up to the most recent investigations of the Parisian team.

During the years of the occupation, French scientists were virtually isolated from the outside world. In 1945, it was possible to send pupils to other western countries, so that they could bring their knowledge of the most recent developments in scientific progress up to date. Among them was Jean Brossel, who returned in 1951 in possession of a mass of information gained under Francis Bitter at M.I.T.

Under the influence of Gorter, Rabi had very successfully applied certain methods to the investigation of atoms in their fundamental state. In 1949, Bitter suggested extending these same methods to the excited states of atoms. Brossel and Kastler together then proposed the ” double resonance method “, which combines optical resonance with magnetic resonance.

While Brossel was at M.I.T., between 1949 and 1951, he carried out pioneer work along these lines on the excited state of the mercury atom. At the same time, Kastler was supplementing the method by the technique of “optical pumping”, which makes it possible to apply “optical methods for studying the microwave resonances” to the fundamental states of atoms. 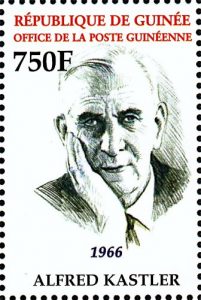 After 1951, Kastler worked in collaboration with Jean Brossel in Paris to perfect all these methods. Among the young men and women at the École Normale, which nurtures the intellectual elite, they found their research workers. Their theses represent the various stages in their collective work, and in 1966 Alfred was awarded the Nobel Prize, and of which some account is given in Kastler’s Nobel lecture. Kastler’s Nobel Prize-winning research facilitated the study of atomic structures by means of the radiations that atoms emit under excitation by light and radio waves. His method of stimulating atoms in a particular substance so that they attain higher energy states was called “optical pumping.” Since the light energy used to stimulate the atoms was reemitted, optical pumping marked an important step toward the development of the maser and the laser.

Alfred Kastler died on January 7, 1984. He belonged to the Westhoffen Kastlers, which are related to the Swabian Kastlers.

Alfred is being notified by the Nobel Prize committee.
(no sound)