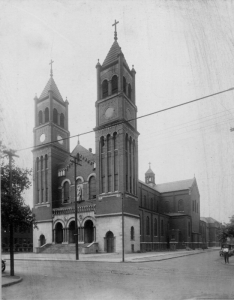 Born in Stuttgart, Germany on 31 March, 1866, Joseph Kastler came to Detroit in 1880. Beginning as an interior decorator and draftsman, Kastler opened his own practice in 1888. He partnered with William Egerton Hunter, and the architectural firm of Kastler and Hunter designed Saint Josaphat Roman Catholic Church in Detroit. Kastler was a member of Saint Albertus Church and had designed the original Saint Josaphat combination church and school building. By 1906 the architects’ partnership had dissolved. Kastler was a member of the Architectural Engineering Society and retired in 1935 from active business. He died in 1939.

St. Hedwig Parish was established on July 3, 1903 when Fr. Jan (John) Mueller was appointed as the first pastor. Joseph G. Kastler, a Detroit architect “widely known in building circles” and of the architectural firm Kastler & Hunter, prepared plans for a two story building with a basement. Consecration of the cornerstone took place in December 1903. This building, plus two others he designed, are shown below. For more information regarding this church, you can visit their website here.

St. Josephat was founded on June 1, 1889, was the third Polish-speaking Roman Catholic parish established in Detroit. On February 2, 1890, it dedicated a combination church and school building. Within a decade plans were begun for a new church rectory and a convent. In 1901 this late Victorian Romanesque-style church was completed at a cost of $100,000. The church was designed by Joseph G. Kastler and William E. N. Hunter. Local carpenters, Harcus and Lang and the Jermolowisz Brothers, were the builders. The stained glass was crafted by the Detroit Stained Glass Works. In 1907 the convent was completed. The complex was listed on the National Register of Historic Places in 1982. St. Francis was designed by architects Kastler and Hunter in 1905. It had been one of the largest Polish parishes in the Archdioces. Dom Polski was also designed by Joseph. Built in 1913, it was a primary meeting and social hall of Detroit Polonia until recently. You can read more here. 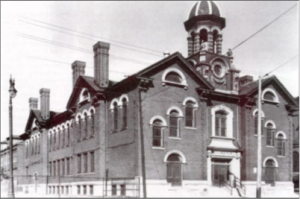 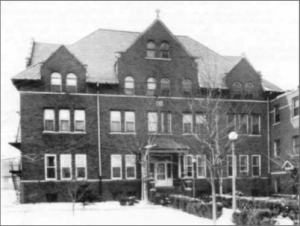 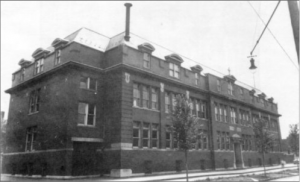 An elementary school on St. Hedwig Street. Houses 16 classrooms. Consecration of cornerstone: 1919. The approximate cost was $160,000.