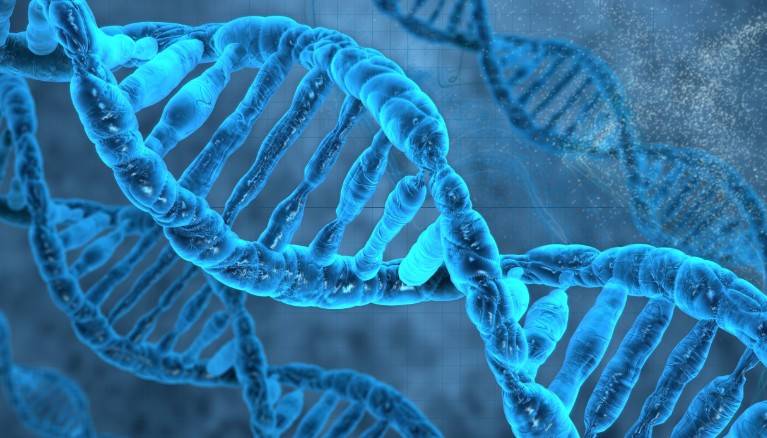 In 2008 I decided to embark on a journey into DNA testing. Up until then, family relationships had been determined by submitted family trees, fragments of information given by family members, and online research. After I had built up the five or so unique family “clans” through these former means, there seemed that the possibility of a few of these clans may have some kind of link. The Kastler name is in fact very rare and has only a handful of origins. The Kastler Surname Origins page describes the known theories. Since the technology was now available to aid in family history, I was ready to use it.

Genetic ancestry testing is the use of DNA information to make inferences about someone’s “deep” ancestry, hundreds or thousands of years into the past. Genetic genealogy on the other hand combines Autosomal DNA and Y-DNA testing with genealogical and historical records, and typically makes use of large databases to identify matches. There is some overlap between the two, but genetic genealogy is generally more reliable because of its use of additional information: the information about your ancestry available from DNA alone is limited.

There are three types of genealogical DNA tests, Autosomal (atDNA), Mitochondrial DNA (mtDNA), and Y-Chromosome (Y-DNA). The Autosomal DNA test can be taken by anyone. Each parent passes down half of their Autosomal DNA to each child. Each child will get a random mix of segments from their parents, and consequently a random mix from each grandparent, etc. This will provide information about your current relatives and recent genetic history. Matches will typically show an estimated degree of relatedness, i.e., a close family match, 1st-2nd cousins, 3rd-4th cousins, etc. The match results are within 5 generations. On Family Tree DNA this is the “Family Finder”, and Ancestry only has this test. The Mitochondrial DNA test can be taken by a male or female. Testing mtDNA allows for investigation into your maternal line and can help identify living relatives whose mtDNA is similar to yours, as well as ancient migration routes your maternal ancestors may have taken. The Y-DNA test is for males who are interested in tracing their male ancestry through the unbroken male line. Only males have a Y Chromosome, which is passed down almost unchanged from father to son. A small number of DNA changes, called mutations, generally occur from one generation to the next. The primary strength of a Y-DNA test is that it can trace your biological father’s male line far back into time, thousands or even tens of thousands of years ago. It provides a means to determine how close two people are related along a common surname. This is the test we use on the Family Tree DNA Kastler group. 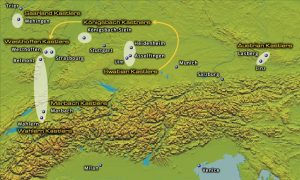 Early origins and migrations of early Kastlers, Kastners, and Kastelers.

There have been several matches in the group over the years, however there was one discovery that no one anticipated. After Y-DNA testing it appeared that myself (Curt Kastler, Swabian Kastler), Glen Kastner (Königsbach Kastner), and André Kastler (Westhoffen Kastler) were all related. The Swabian Kastlers, are related to the Kastners of Königsbach-Stein, Germany (near Karlsruhe) to a common ancestor around 1350-1450. The Kastners are related to the Westhoffen Kastlers in Alsace, France to a common ancestor around 1400-1500. My opinion is that some Swabian Kastlers left and went west to Königsbach and settled. Then carried on south-west to Westhoffen to be winemakers in the beautiful Alsatian countryside. As of this time there’s no proof of how the migration may have happened. In the Kastner family tree, the oldest person is Konrad Kastner, who died ca.1590. The oldest person in the Westhoffen family tree is Conrad Kastler, who died 17 Sept 1593. Perhaps it’s just coincidence, but in my opinion they’re the same person.

There are currently over 10 Kastlers from various families who have taken the DNA test. We’ve have matches that have confirmed relationships with at least four clans. We have samples representing ancestors from Austria, France, Germany, Poland, and Switzerland. We’re always looking for more samples.

The public Kastler DNA website is located at FamilyTreeDNA.